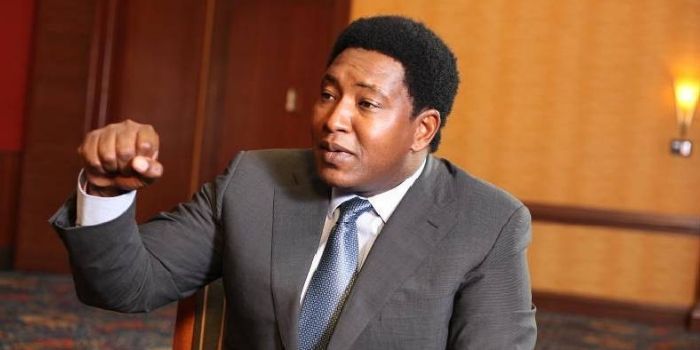 Senator Ledama: Why do I have an offshore account

Narok Senator Ledama ole Kina came out to defend his decision to own an offshore account in the middle of the latest talk that linked the first family to multiple offshore accounts.

Speaking in an interview with a local television station on Tuesday, October 5, the lawmaker said his decision to own an offshore account was necessitated by the need to fund the financial needs of his daughter who is in United States.

â€œAn offshore account is one that you use to diversify your investments. Let’s say you have a student going to school in America like in my case where a kid is a student in America I have to make sure she has money to use, â€Ledama said.

Defending the movement, he said that at present there is no law in the country that prohibits an individual from owning one. But all state agents are prohibited from possessing them without disclosing them.

Justifying his position, Ledama said that a case of money laundering can only be established when an individual leads a miserable life and then suddenly starts owning billions which are invested outside the country. .

“If there is a case where people are laundering money and sending it to offshore accounts then we should look into it, but if you are a hardworking Kenyan and decide to invest overseas for you protect from political instability, then that’s good, â€Ledama said.

He argued that the country currently needs to develop regulations that will guide offshore investments.

“We need a law to allow those who have businesses outside the country to file taxes here, to report what they paid as tax there.”

At the same time, Ledama protected President Uhuru Kenyatta from attacks directed against him by stating that the Pandora Papers revealed that he was only a beneficiary of offshore economies.

â€œIf I was president and it was my own money that I was investing abroad, I would ask if this is the best thing to do, but if I am a beneficiary, it is a different case. The truth is that if we could invest abroad, we would, â€he insisted.

Uhuru, for his part, responding to a report from the International Consortium of Investigative Journalists (ICIJ), said he would give a detailed report after his state tour of Barbados.

â€œThese reports will go a long way to improving the financial transparency and openness we need in Kenya and around the world. The movement of illicit funds, the proceeds of crime and corruption thrive in an environment of secrecy and obscurity, â€the president said.

“The Pandora Papers and subsequent follow-up audits will lift this veil of secrecy and obscurity for those who cannot explain their assets or their wealth. Thank you.”

The report linked the Kenyatta family to offshore bank accounts and companies valued at over Ksh 3.3 billion.

President of the Republic of Kenya, Uhuru Kenyatta

The weekend reads: Could the IRS be monitoring your bank account?