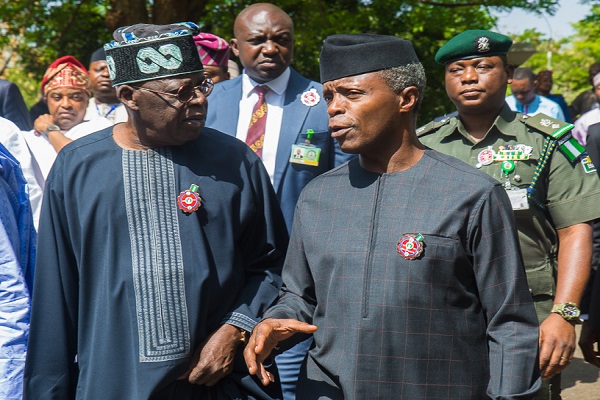 Osinbajo: Tinubu is the real traitor, he must account for Alpha Beta ownership – Bode George

All Progressives Congress (APC) national leader and presidential candidate Asiwaju Bola Ahmed Tinubu and his loyalist have been warned to stop portraying Vice President Yemi Osinbajo as a traitor.

These individuals and group called Osinbajo a traitor, going so far as to compare the country’s second citizen to Judas Iscariot who betrayed the biblical Jesus and Akintola who betrayed the late sage, Obafemi Awolowo – in reference to the action group crisis of 1962 which was the result of the power struggle between two political leaders of the Western Region and Action Group (AG)Chief Awolowo and Chief Samuel Ladoke Akintola.

Speaking in an interview with Independent on Saturday, George Olabodeformer National Vice President of People’s Democratic Party (PDP) accused Bola Tinubu to be the real traitor.

George, a well-known critic of the former governor of Lagos State, said Tinubu had no moral right to accuse Osinbajo of treason.

He said “What spins must spin. Almighty God is awesome in his ways and only the truth can set you free. Tinubu is not allowed to call Osinbajo all kinds of names just because he also said he wanted to run for president of their party.

“Tinubu was a serial traitor himself. Has he forgotten how he got the AD governor ticket in 1999? It was ‘Omoluwabi Eko, the late Engr. Funsho Williams who won the ticket. however, they wronged him and he (Tinubu) became the beneficiary of this shortfall.