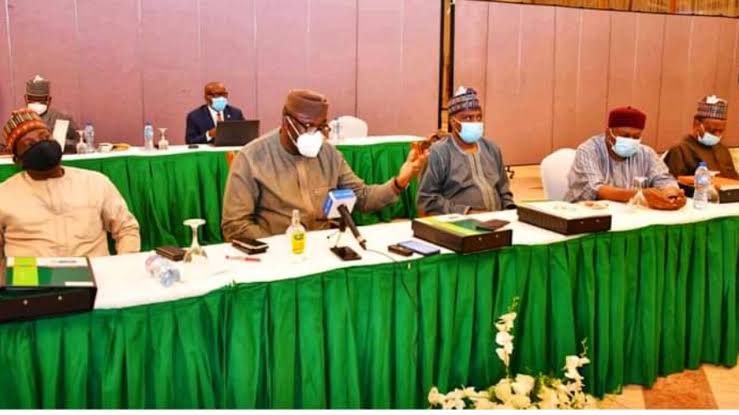 The Nigeria Governors’ Forum (NGF) has sounded the alarm over an alleged attempt to deduct $418 million from the federation’s account to settle the controversial Paris Club debt.

The governors said so in a letter dated August 1 addressed to Boss Mustapha, secretary to the government of the federation (SGF).

They alleged that the plan is led by Abubakar Malami, Attorney General of the Federation (AGF), and Zainab Ahmed, Minister of Finance.

“The attention of the NGF has been drawn to yet another attempt by the Attorney General of the Federation (AGF) and the Minister of Finance (HMF) to circumvent the law and the recent Supreme Court judgment by surreptitiously obtaining the approval of The FEC will make payment of the sum of $418 million to four contractors who allegedly executed contracts regarding Paris Club reimbursements to states and local governments,” reads the letter, signed by Kayode Fayemi, president of the NGF and governor of Ekiti.

“It should be recalled that an earlier endorsement by Mr. President under the aegis of AGF and HMF to pay the said sum to the contractors through the issue of promissory notes had been met with stiff resistance from the 36 state governors who have gone to court for redress through their attorneys general.

“The case is currently pending on appeal at the Abuja Court of Appeal for hearing.”

“Significantly, the Governors said that while the appeal is pending, one of the contractors, which is the beneficiary of the $142,028,941.95 promissory notes, Riok Nigeria Limited, and who lost in court of Appeal, further appealed to the Supreme Court, in Case No: SC 337/2018.

“On June 3, 2022, the Supreme Court also dismissed Riok’s appeal as being without merit. The SC had on occasion clarified that neither the NGF nor ALGON had the authority to award contracts and invoice them directly to the federation’s account, as was done in this case. The SC specifically held at page 43 that:

According to the governors, the dismissal of the RIOK case by the court also affected the payment of $1,219,440.45 and $215,195.36 to two private lawyers of RIOK, Nwafor Orizu and Olaitan Bello who are also beneficiaries of tickets to order by the Debt Management Office (DMO).

“These cases are ongoing and no action should be taken to enforce judgment and alter the status quo until the issues are fully resolved. A warning issued to prevent all parties involved and the public from negotiating or to honor issued promissory notes had already been issued,” the NGF added.

“The purpose and essence of the SC’s final statement is that none of the contractors recommended for payment of the sum of $418 million by AGF and HMF can be so paid because the contracts and payments invoked have not been dealt with as prescribed by the Constitution and law.

“The funds are certainly not accessible through the federation account, as the AGF and HMF are vigorously pursuing.

“The FEC may also wish to note that the excessive haste with which contractor payment under the Paris Club Reimbursement has been pursued and processed by AGF and HMF has already created the impression in the discerning mind from the public that it would seem that the interests of entrepreneurs take precedence over the well-being and interest of the general public which senior government officials had sworn to defend and protect.

Over the years, the controversial payment of $418 million to consultants Paris Club reimbursement had become a contentious issue between the three levels of government.

Market down: 3 smart things to do in your brokerage account