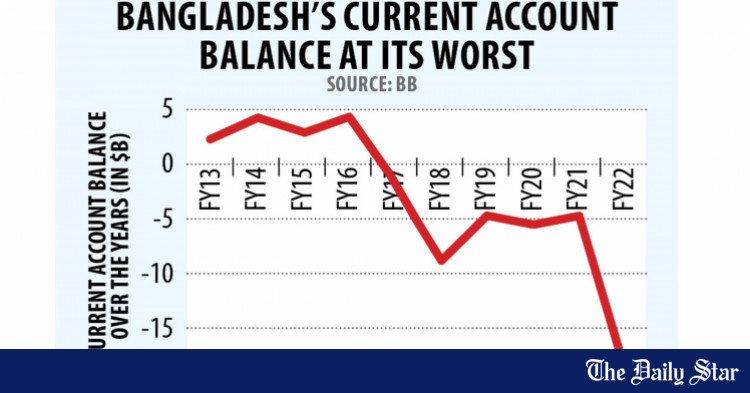 Current account balance: continues to plunge into the red

Bangladesh’s current account balance continued to plunge into the red in September, increasing pressure on the exchange rate which is trading at record highs against the US dollar.

The current account records a nation’s transactions with the rest of the world, particularly its net trade in goods and services.

For all the latest news, follow the Daily Star’s Google News channel.

At the end of September, the current account showed a deficit of $3.6 billion, as exports and remittances fell and imports remained high, according to Bangladesh Bank data.

A year earlier, the current account had posted a deficit of $2.5 billion.

The deficit is expected to widen further as exports and remittances, the two main components of the current account, fell for the second consecutive month in October.

In fact, according to BB’s latest projection, the current account deficit will reach $16.5 billion by the end of fiscal year 2022-23.

The gaping current account deficit – which was $1.5 billion in August – means that the exchange rate and foreign exchange reserves will come under further pressure.

As of October 26, gross foreign exchange reserves stood at $35.9 billion – an import cover of just over four months. A year earlier, reserves stood at $46.5 billion, which was enough to cover more than seven months of import bills.

If the taka depreciates further against the dollar, it will fuel inflation, said Ahsan H Mansur, executive director of the Bangladesh Policy Research Institute.

In August, inflation hit a 12-year high of 9.5%. It slowed to 9.1% in September, according to data from the Bangladesh Bureau of Statistics.

The central bank injected dollars into the market to maintain exchange rate stability, but this largely eroded reserves.

Hussain called for the immediate withdrawal of the multiple exchange rate system which was introduced by the Bangladesh Foreign Exchange Dealers’ Association, a platform of banks to implement exchange-related policies in the market, in September.

As per the BAFEDA decision, banks are allowed to pay a maximum of Tk 107 for every dollar to senders.

In the curbside market, each dollar traded at Tk112-113 last month.

The difference means that the migrant workers may have sent their money via hundi, a system of illegal cross-border financial transactions that provides an exchange rate closer to the parallel market.

“That explains why official remittance figures are falling.”

Remittances are expected to increase as record numbers of migrant workers have gone abroad in recent times, Hussain said.

In the first nine months of this year, 8.75 lakh migrant workers left the country, which is more than the combined figures of 2020 and 2021.

“Between March and August, migrant workers sent decent volumes of remittances. It started to drop from September,” Hussain added.

Mansur fears that Hundi will continue to thrive and remittances will not pick up, even if the exchange rate gap between the formal and informal markets narrows due to a spike in capital flight caused by instability. on the economic and political fronts.

“In such a situation, the government will face a critical situation to bring stability in the macroeconomic sector.”

He hopes, however, that the balance of payments situation can improve to some extent if the government manages credit support from multilateral agencies, including the International Monetary Fund.

While imports are certain to contract in the coming months as the opening of letters of credit declined between July and September, the downward trend in exports and remittances poses a major concern, said Mansur, a former IMF economist.

Export earnings may not rebound in the next two months thanks to the economic slowdown in major markets in North America and Europe, said Mustafizur Rahman, a senior fellow at the Center for Policy Dialogue.

“The economy is now in a difficult situation,” he added.

What we read this week [November 1, 2022] – Insolvency/Bankruptcy